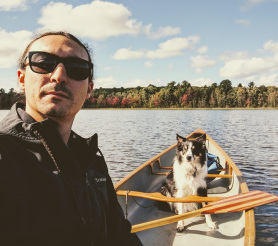 Tyler Dettloff is an Anishinaabe Métis, Italian, and Irish musician, poet, professor, gardener, and water protector raised on the edge of the Delirium Wilderness. He currently lives in Gnoozhekaaning (Bay Mills, Michigan) and teaches College Composition at Lake Superior State University. He has earned a B.S. in English and a dual track M.A. in Literature and Pedagogy from Northern Michigan University.
Mostly, he enjoys walking along rivers with his wife Daraka and daughter Meadow and through swamps his dogs Banjo and Fiddle.

Tyler said, “I play folk music because it is the music of the people. The things I sing and the things I am drawn to write about are the conversations that are happening around here of the people.”

Musician and poet from the swampy Delirium Wilderness of Michigan’s Upper Peninsula, Tyler performs as a one-man-blues-band and records with Lost Dog Records.

A musician of Rock, World and Folk, Peter Von Althen is a drummer and percussionist with an impressive catalogue of work. Whether in studio or on tour, Peter has worked […]