Mike Robillard created The Taxi Passenger Revue, a podcast series, that ended up as eight episodes that featured six different guests. The Borderline streamed the episodes during late spring and early summer 2020. In tribute to Mike, and with the blessing of his family, The Borderline now presents the series over an 8-week period, each program then available on demand. Each of the episodes is classic Mike!

When the time had arrived for the idea of The Borderline Network to hit the world wide wavelength, there were a few people in mind that we knew could be key contributors. At the front of that list was Mike Robillard.

It was the summer of 1988. I was the owner of Jersey Dean, a downtown clothing store at the Paul Mall, specializing in graphic design wear. Jersey Dean was planning to shoot a tv commercial and I had asked some teens to participate. They had been hanging around downtown riding skateboards and unicycles. It turned out they also were musicians. One of them was Mike Robillard, another was Bill Cowen.

They shot the commercial for laughs and a free t-shirt. They were in the beginnings of forming a band, 4 Really Nice Guys. I got a kick out of the name and the fact that they were an 8-piece, with horns. Mike, of course, played bass. Mike played in a lot of bands over the following years.

Mike also traveled to Europe. Prague, Czechoslovakia in particular was a favourite for him. French was a natural language for him. He read extensively and took keen interest in world events. He had nuanced political views with a passionate way of expressing them. He was somewhat of a music historian with detailed knowledge of the 1990’s era. He knew the local history inside out. He was an artist beyond the music he loved playing. He loved to draw, paint, sketch and write. He loved cats.

Mike lived in an apartment downtown on Queen Street, next door to where The Borderline would make its home. I had only bumped into Mike on and off over the years. He was always open with me, as I imagined he must be with everyone he knew, and would sometimes share with me his battle with his mental health. Often, it would be outside a club, late night as he awaited a fare for his cab. Mike was a taxi driver.

We reconnected on the idea of The Borderline. This hyper local, hyper sonic platform appealed to Mike’s creative soul. He agreed to start a podcast of his own, an idea he had actually had in mind for many years. Over a long period of time he had collected music and sound bites for this very purpose. He dove in and began creating something smart, unique, entertaining, informative, cutting-edge, a world perspective from his distinctly personal point of view. Mike called the podcast, The Taxi Passenger Revue. 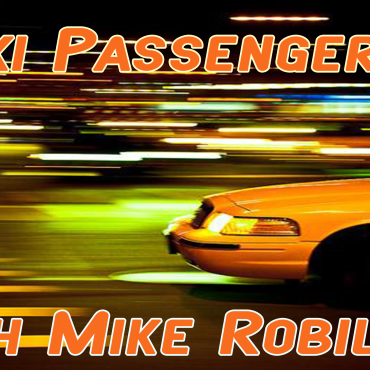 Mike Robillard created The Taxi Passenger Revue, a podcast series, that ended up as eight episodes that featured six different guests. The Borderline streamed the episodes during late spring and […]

True Taxi In Gentle Rain : A Tribute by DJ Seith

The Taxi Passenger Revue w. Mike Robillard – Shayne Wigglesworth : Bauhaus In The Middle Of The Street